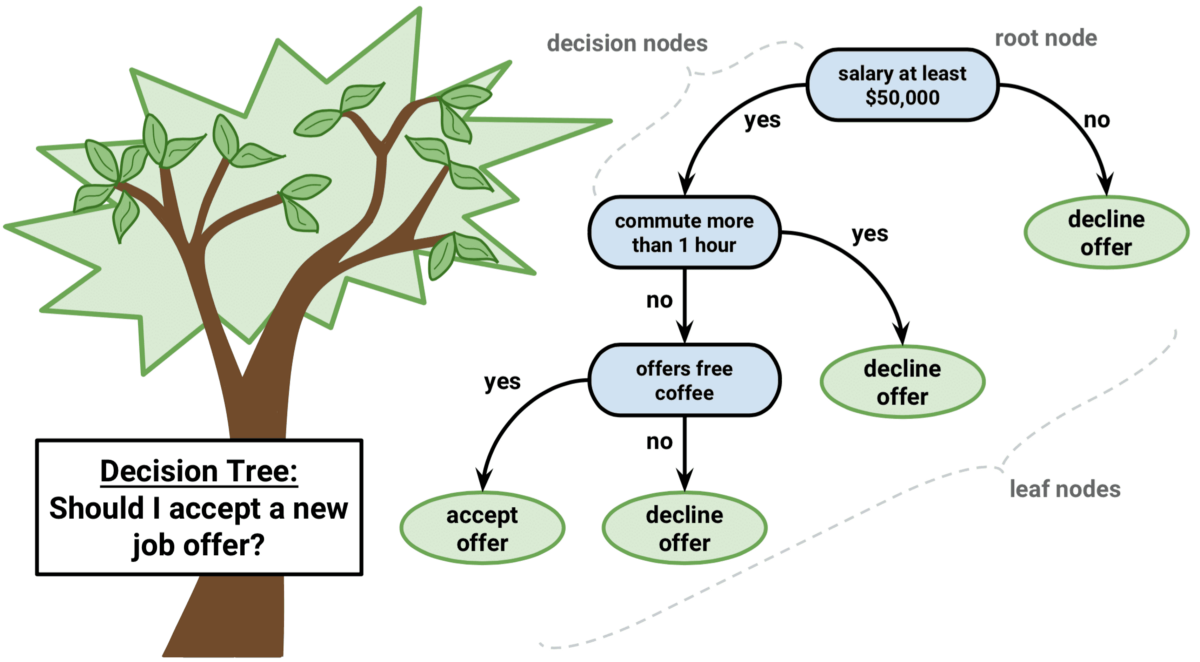 The decision tree is a very popular machine learning algorithm. It works for both linear and non-linear data. Also, it can be used for both classification and regression. With great libraries and packages available in Python and R, anyone can easily use decision tree and other machine learning algorithms without even knowing how it works. But knowing the intuition or mechanism of an algorithm helps make decisions on where to use it.

In this article, I will try to give you an intuition on how a decision tree algorithm works.

This article will include:

Introduction to the Decision Tree

As you can see in the picture, It starts with a root condition, and based on the decision from that root condition, we get three branches, C1, C2, and C3. It does not have to be three branches. Branches maybe more, depending on the number of classes in the feature of the root node. One brach ended up to a Leaf. Leaf node means the final decision or a prediction. C1 and C3 of the root node ended up with Confition1 and Condition2.

These are some terms that need to be clear before diving deeper:

Decision Nodes: Look at the ‘condition1′ and ‘condition3’ nodes above. We got those nodes after splitting based on the root node and we further split based on the decision node.

Leaf Nodes: These are the final nodes where the decision tree makes final decisions and no further splitting is possible. In the picture above Decision2 and Decision3 are the leaf nodes.

We have the dataset. As per the previous discussion, we need to have a root node based on what we will start splitting the data. But we have three variables. How to decide root node? Should I simply start with N1 because it comes first in the dataset?

Not really. To understand how to make a good decision on which feature should be the root node, you need to learn about information gain.

The root node or first test attribute is selected based on a statistical measure called information gain.

In this article, we will talk about ‘Information gain’ in detail.

Information gain helps to measure the reduction of uncertainty of a certain feature. It also helps decide which feature is good as a root node.

The calculation of information gain depends on Info. That is also called entropy.

The formula for Info:

Let’s work through an example.

I will work through the dummy dataset above to find out which feature will be the root node for this dataset.

Now, let’s calculate the Info for our dummy dataset. This dataset has a total of 14 rows of data, 8 yes classes and 6 no classes.

Next, we need to calculate the Info for the three variables N1, N2, and N3 one by one.

We need to calculate the amount of information needed to classify the samples by splitting the dataset on N1:

First, let’s dissect the data in N1. There are:

The information necessary to classify the dataset based on N1 is:

So the entropy will decrease by 0.02 if N1 becomes the root node.

So, the information gain for N2, and N3 are:

From the calculation above, the attribute with the highest information gain is N1. So, N1 will be the root.

At this stage with our root node fixed, the decision tree will look like this:

We chose the root node and split the data based on the root node. The picture shows the exact division of the data with corresponding classes.

As you can see when it is ‘Rainy’ or ‘Sunny’ entropy is very high. Because there is the same number of Y’s and N’s. But Entropy is lower when it is ‘cloudy’. So, the class can be Y when it is ‘cloudy’. We can split the data again based on N2 and N3. For that, we have to calculate the information gain for each of the subnodes ‘Rainy’, ‘Cloudy’, and ‘Sunny’ to decide which feature comes next and where. As you can see, for each division we have much smaller datasets now.

I am not showing any further calculation here. The intention of this article is to give an idea about how a decision tree algorithm works.

Where to Stop Splitting

We worked on splitting the data based on features. This dummy dataset has only 3 features. But real-world datasets can have a lot more features to deal with. If we have a huge number of features and we want to use all the features to build the tree, the tree will become too large. That may cause overfitting and long computation time.

To handle this, there is a max_depth parameter in the decision tree function of the scikit-learn library. If the max depth parameter is large, the tree will be larger. So, we can choose the depth of the tree. Though you can always use any feature selection method of your choice to select a fewer number of features for the algorithm.

There is another parameter, max_features. The name of the parameter says what it does. You can specify the maximum number of features you want to use for your tree.

Please see the documentation for other parameters.

6 Ways to Dealing With Null Values

A Complete Guide for Detecting and Dealing with Outliers