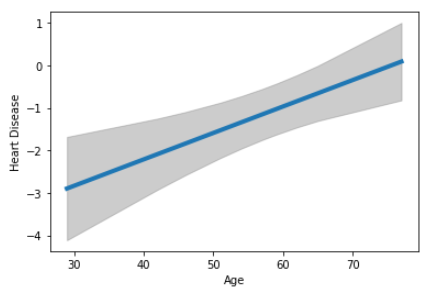 This article will explain a statistical modeling technique with an example. I will explain a logistic regression modeling for binary outcome variables here. That means the outcome variable can have only two values, 0 or 1. We will also analyze the correlation amongst the predictor variables (the input variables that will be used to predict the outcome variable), how to extract the useful information from the model results, the visualization techniques to better present and understand the data and prediction of the outcome. I am assuming that you have the basic knowledge of statistics and python.

For this tutorial, we will use:

I used the Heart dataset from Kaggle. I have it in my GitHub repository. Please feel free download from this link if you want to follow along.

Let’s import the necessary packages and the dataset.

The last column ‘AHD’ contains only ‘yes’ or ‘no’ which tells you if a person has heart disease or not. Replace ‘yes’ and ‘no’ with 1 and 0.

The logistic regression model provides the odds of an event.

A Basic Logistic Regression With One Variable

Let’s dive into the modeling. I will explain each step. I suggest, keep running the code for yourself as you read to better absorb the material.

Logistic regression is an improved version of linear regression. We will use a Generalized Linear Model (GLM) for this example.

There are so many variables. Which one could be that one variable? As we all know, generally heart disease occurs mostly to the older population. The younger population is less likely to get heart disease. I am taking “Age” as the only covariate. We will add more covariates later.

The result summary looks very complex and scary, right? We will focus mostly on this part.

Hopefully, it looks a lot better now. As a reminder, here is the linear regression formula:

Here Y is the output and X is the input, A is the slope and B is the intercept.

To understand the odds and log-odds, we will use the gender variable. Because a categorical variable is appropriate for this. Check the proportion of males and females having heart disease in the dataset.

A logistic regression model provides the ‘odds’ of an event. Remember that, ‘odds’ are the probability on a different scale. Here is the formula:

Let’s calculate the ‘odds’ of heart disease for males and females.

The ‘odds’ show that the probability of a female having heart disease is substantially lower than a male(32% vs 53%) that reflects very well in the odds. Odds ratios are common to use while working with two population groups.

The ratio comes out to be 3.587 which indicates a man has a 3.587 times greater chance of having a heart disease.

Remember that, an individual probability cannot be calculated from an odd ratio

Another important convention is to work with log-odds which are odds in a logarithmic scale. Recall that the neutral point of the probability is 0.5. Using the formula for ‘odds’, odds for 0.5 is 1 and ‘log-odds’ is 0 (log of 1 id 0).

Let’s see the model summary using the gender variable only:

We can use multiple covariates. I am using both ‘Age’ and ‘Sex1’ variables here. Before we dive into the model, we can conduct an initial analysis with the categorical variables. Check the proportion of males and females having heart disease in the dataset.

Now, generate a model using both the ‘Age’ and ‘Sex’ variable.

Understand the coefficients better. Adding gender to the model changed the coefficient of the ‘Age’ parameter a little(0.0520 to 0.0657). According to this fitted model, older people are more likely to have heart disease than younger people. The log odds for heart disease increases by 0.0657 units for each year.

In the case of the gender variable, the female is the reference as it does not appear in the output. While comparing a male and a female of the same age, the male has a 1.4989 units higher chance of having a heart disease.

All the coefficients are in log-odds scale. You can exponentiate the values to convert them to the odds

Now, we will fit a logistic regression with three covariates. This time we will add ‘Chol’ or cholesterol variables with ‘Age’ and ‘Sex1’.

Visualization of the Fitted Model

We will begin by plotting the fitted proportion of the population that have heart disease for different subpopulations defined by the regression model. We will plot how the heart disease rate varies with the age. We will fix some values that we want to focus on in the visualization. We will visualize the effect of ‘Age’ on the female population having a cholesterol level of 250.

We can visualize in terms of probability instead of log-odds. The probability can be calculated from the log odds using the formula 1 / (1 + exp(-lo)), where lo is the log-odds.

The plots above plotted the average. On average that was the probability of a female having heart disease given the cholesterol level of 250. Next, we will visualize in a different way that is called a partial residual plot. In this plot, it will show the effect of one covariate only while the other covariates are fixed. This shows even the smaller discrepancies. So, the plot will not be as smooth as before. Remember, the small discrepancies are not reliable if the sample size is not very large.

This plot shows that the heart disease rate rises rapidly from the age of 53 to 60.

Using the results from the model, we can predict if a person has heart disease or not. The models we fitted before were to explain the model parameters. For the prediction purpose, I will use all the variables in the DataFrame. Because we do not have too many variables. Let’s check the correlations amongst the variables to check if there is anything unusual.

We can see that each variable has significant correlations with other variables. I will use all the variables to get a better prediction.

The predicted output should be either 0 or 1. It’s 1 when the output is greater than or equal to 0.5 and 0 otherwise.

Now, compare this predicted_output to the ‘AHD’ column of the DataFrame which indicates the heart disease to find the accuracy:

In this article, I tried to explain the statistical model fitting, how to interpret the result from the fitted model, some visualization technique to present the log-odds with the confidence band, and how to predict a binary variable using the fitted model results. I hope this was helpful.

Introduction to the Descriptive Statistics